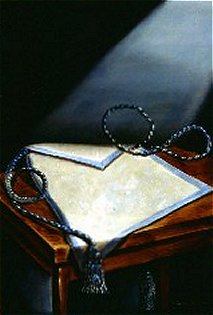 During his seven year apprenticeship, the new Mason generally lived with his Master and was, in reality, a bond servant with many duties, few rights, and little freedom. He could never attend the meetings of the Fellow Crafts, but worked long, hard hours as a bearer of burdens. At the end of his apprenticeship he was examined in Lodge. If his record was good, if he could prove his proficiency under test, and if the members voted in his favor, he was made a full member of the Craft, with the same duties, rights, and privileges as the others. He was then called a "Fellow Craft Mason."

For our ancient operative brethren, membership in the Lodge was far more than just a requirement of their occupation. It was the center of their social life, their security in old age, their livelihood, and the source of their education. It was during their "passing" to the rank and degree of Fellow Craft that their education began.

In this degree you will hear the Middle Chamber lecture. It represents the beginning of a Fellow Craft’s education. We owe the form of this lecture and the degree to a man named William Preston, who lived in England during the early days of speculative Masonry. Preston did not like the fact that the lectures then given in connection with the degrees of Masonry followed no ritualistic pattern, but could assume whatever form the Master desired. He set about to write a formal lecture for each degree. After working on these lectures for many years, he succeeded in having them adopted by the Grand Lodge of England. Preston believed that one of Masonry's principal duties was to actually bring light to a candidate by educating him. He believed that knowledge was the universal solvent for the problems of the world. In his time there were few opportunities for the average man to acquire a formal education. And so, according to some Masonic authorities, Preston conceived the idea of condensing in the Fellow Craft lecture as many of the elements of a formal education as possible. Thus, the new Fellow Craft received his first exposure to architecture, anatomy, and the seven liberal arts and sciences. The original lecture delved into these areas in great detail, and in so doing, gave the average Masonic candidate of Preston's era an insight into certain knowledge which he might never have received otherwise.

To the modern Mason, the formal teachings in the lecture are elementary, so much so, in fact, that when we first hear them we wonder why they were brought in at all. As symbols, however, we find them significant.

As you progress through the three degrees, remember also that they are emblematical of the stages of one's life. The Entered Apprentice represents youth, nd the attainment of knowledge. The Fellow Craft degree represents manhood, and the application of what has been learned in our youth. And we will see later, that the Master Mason degree represents the man of years, with the wisdom of a lifetime, and the setting sun in his eyes.

Be attentive also to the references to the building of King Solomon's Temple. Much of the lore and lessons of Masonry has its roots in the tradition surrounding the construction of this magnificent edifice. And remember that a firm foundation in the principals taught in this degree will qualify you to advance to the last and highest grade of Ancient Craft Masonry — that of the sublime degree of a Master Mason.

Third and Fifth Thursday of each month at 7:30 p.m.